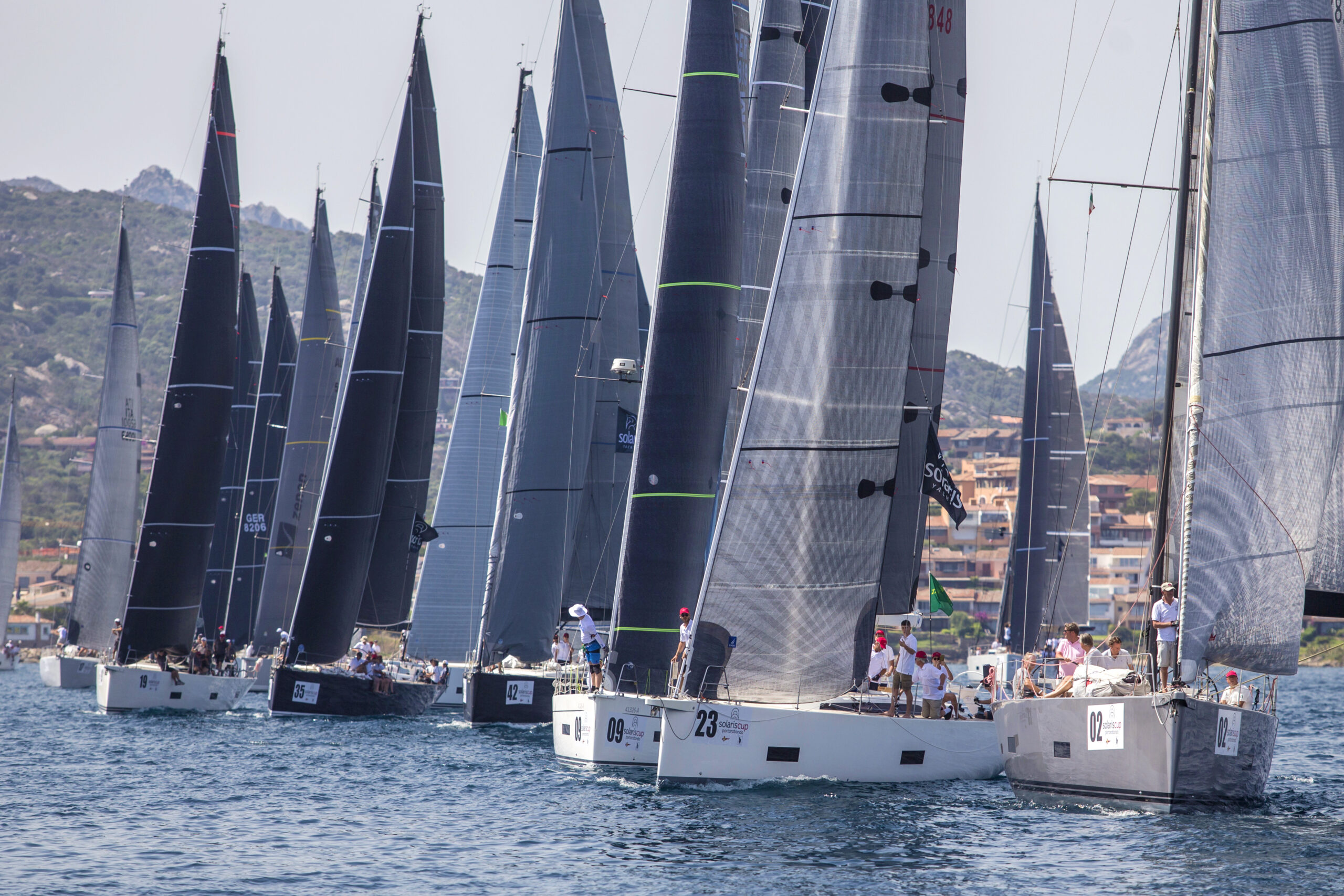 48 Solaris boats of different sizes up to the majestic 80 RS, challenged each other in the turquoise waters of Porto Rotondo in the yearly event of the Solaris Cup, now in its seventh edition. The North-East wind, the Mistral, gave way to a more delicate Gregale speed 2/3 knots, which supported “Mistral Gagnant”, the powerful 50-footer of Marco Ferrero, powered by North Sails

June 26th and 27th in Porto Rotondo. 48 boats representing the Solaris fleet, including the imposing 24- meter long Solaris 80 RS, featured by Javier Soto Acebal’s latest generation waterlines, met to compete in the seventh edition of the Solaris Cup, the social sporting event that opens the season at the Yacht Club Porto Rotondo. The owners of the Solaris yachts, the performance cruisers designed and built for sailors, will compete in friendly and stiff challenges in the emerald waters, sailing among the varied granite rocks of the islands of Soffi, Mortorio, Nibani and Poveri.

More than 500 sailors from Austria, Belgium, Chile, France, Germany, Gibraltar, UK, Italy, Malta, Spain and Switzerland gathered along the quays of the elegant Yacht Club of Porto Rotondo, giving life to a single-brand event that has no equal in the panorama of the shipyards producing high performance sailing yachts.

The crews hoped that the Mistral, uncontested king of the Northern Sardinia waters, would enliven the weekend. However, the unpredictable wind, after blowing for two days 5/6 knots wind speed, letting the Solaris aficionados test the new models during the Solaris Days, decided to take a rest and gave way to the Gregale, alternately with a delicate Sirocco, which, however, did not blow strongly. The wind speed was 2/3 knots, forcing the Solaris crews to adopt more subtle techniques and not to focus on the strength.

These weather conditions have highlighted the responsiveness of the Solaris performance cruisers, which even in light winds can always give the best of themselves and greatly satisfy their owners.

With winds between 5 and 10 knots, the Solaris fleet spread out between the coast and the islands of Soffi and Mortorio. Even in light wind conditions, the extraordinary technical qualities of these boats have immediately emerged: high performances and adaptability in the different paces along a coastal route of 18 miles. The two days of racing have been cheered on several occasions by the presence of some dolphins, which jumped in front of the boat’s bows. The Solaris 50 “Mistral Gagnant”, always managed to keep the lead in the two races, conquering the highest step of the podium in the overall ranking, followed by the Solaris 42 One “Tango” of Christian Kilger, partner of YCPR. The Solaris 55 “Team 42” of Daniel Segalovicz,  won the 3rd place.

The technical organization at sea was handled by the Sports Director of the Yachting Club Porto Rotondo, Nanni Ono. The Project Manager of B – Yacht Service Club, Fabrizio De Falco, managed the ground logistics.

During the award ceremony, Solaris Yachts and B – Yachts Service Club thanked for their hospitality Giacomo Pileri, Director of the Marina of Porto Rotondo, the 1st Lieutenant Antonio Anselli, Commander of the Porto Rotondo Beach Delegation and Luigi Donà dalle Rose and Sandro Onofaro, respectively, Honorary President and Vice-President of the Yacht Club Porto Rotondo.

All the spotlight were on the brand-new Solaris 60, an innovative mini-maxi that contains all the qualities typical of the yard, starting with the exclusive building technique that distinguish the boats since 1974. The new Solaris 60, with her waterlines and the exterior layout, designed by Javier Soto Acebal in collaboration with the Studio Roséo (interior layout), is 18,31 m long and 5,28 m wide. The standard draft is 3,20 m, the optional lifting keel has a maximum draft of 3,50 m and minimum of 2,50 m. Capable of combining comfort and performance, the Solaris 60 offers an interior layout featured by two double aft cabins with single or double beds and the owner’s cabin, forward, with central or outboard bed.

The lively event, which has always given the participants exciting moments, is characterized by the passion for the sea and for sailing, which are the real protagonists. The enchanting setting of the Costa Smeralda makes each edition of the Solaris Days & Solaris Cup more and more suggestive.

See you next year at the Solaris Days & Solaris Cup 2022 and fair winds!